Open-Source Vaccines Got More Funding From Tito’s Vodka Than the Government by Jason Koebler
Friday January 14th, 2022 at 7:19 AM

With the Omicron variant spreading across the U.S. at an unprecedented speed, medical experts have reignited their calls for mass-producing patent-free COVID-19 vaccines to address the lack of widely available vaccines in low-income countries. But two scientists in Texas who have successfully developed such a vaccine say their effort still hasn’t received any funding from the world’s richest countries, including the United States.

Dr. Peter Hotez and Dr. Maria Elena Bottazzi are professors at the Baylor College of Medicine and co-directors of the Texas Children’s Center for Vaccine Development, where they are renewing their pleas for the U.S. government and other G7 countries to financially support the mass production of Corbevax, the world’s first open-source, patent-free COVID-19 vaccine being distributed on a mass scale.

Virologists have frequently noted that new variants like Omicron are more likely to emerge in countries where vaccines aren’t widely available—a problem that vaccine patents exacerbate, and that efforts like Corbevax aim to directly address. Without vaccine equity, low-income nations suffer from the virus disproportionately, all the while increasing the chances that the pandemic will continue indefinitely.

“The U.S. government could, tomorrow, agree to make 4 billion doses of our vaccine,” Hotez told Motherboard. “There is still no roadmap to vaccinating the world. We're doing what we can, but we could do much more if we had help from G7.” 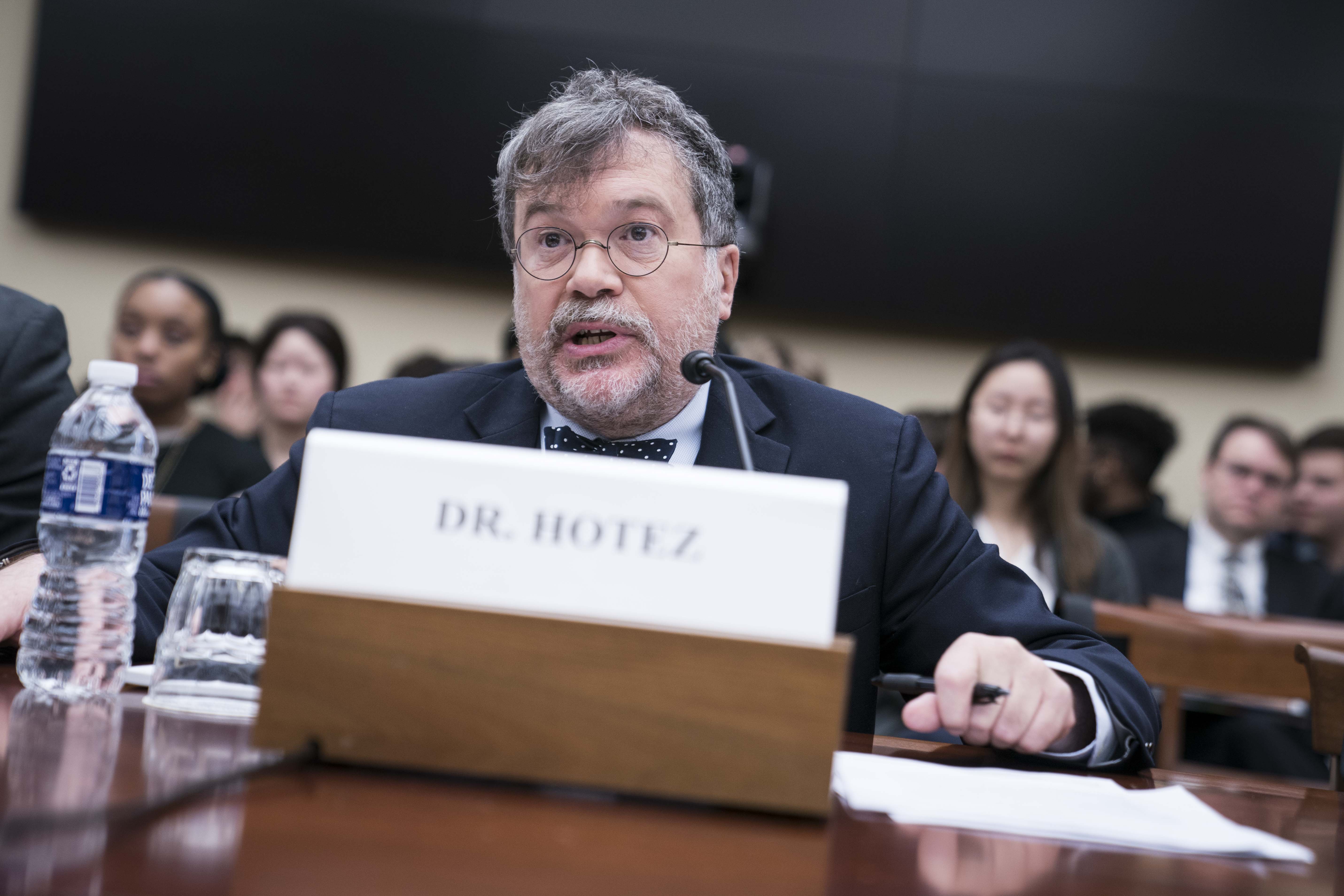 In July 2021, the U.S. government and Pfizer signed a $3.5 billion contract for the purchase of 500 million doses of the Pfizer/BioNTech vaccine for international donation to low- and middle-income countries, according to a heavily redacted contract obtained by Knowledge Ecology International, a social justice and transparency oriented nonprofit. Each Pfizer/BioNTech dose costs $7, whereas Biological E, an Indian company that has licensed Corbevax, is selling each of its shots for about a dollar.

The doctors helped create what they call the “vaccine for all” with recombinant protein subunit technology, a type of vaccine that has been used to treat hepatitis B for over four decades. Cuba’s Soberana 02, patented by the state-run Finlay Institute, relies on similar technology to combat COVID-19. Lower-income countries are able to mass produce recombinant protein vaccines more easily than ones that rely on newer technology, like Pfizer/BioNTech and Moderna’s mRNA designs or Johnson & Johnson’s adenovirus vaccine.

And unlike pharmaceutical giants, the Texas center is freely sharing the recipe and know-how with anyone who asks for it—without strings attached—in order to, as they put it, “decolonize,” the vaccine distribution process.

“Our goal is to save lives, not make a profit,” said Hotez. “We knew that for resource poor settings, there'd be a learning curve before you could make enough mRNA or adenovirus vectored vaccines for the 9 billion doses that would likely be needed for Africa, Asia, Latin America. So we right off the bat took a different approach to use the technology that we have used before to partner with vaccine developers in low- and middle-income countries.”

The Indian government approved Corbevax under an emergency authorization on Dec. 28, following successful clinical trials boasting a 90 percent efficacy rate against the original COVID-19 strain and 80 percent against Delta. Whether Corbevax is protective against the Omicron variant is unclear. However, one study conducted by researchers at Ragon Institute of MGH, MIT and Harvard indicated that mRNA vaccines were only protective against the Omicron variant with a booster shot.

Biological E has already produced 150 million doses, anticipates producing 200 million doses per month, and has received an order from the Indian government for 300 million doses. Hotez and Bottazzi expect Indonesia, Bangladesh, Botswana, and South Africa to be next in line.

Financial support from wealthier countries could accelerate the distribution process. To date, the U.S. and European countries have hoarded vaccines, and pharmaceutical companies and the US government have refused to share the manufacturing know-how and recipes. The World Health Organization and some public health experts have criticized wealthier countries for distributing booster shots to their own citizens before lower-income countries could provide the first two shots to their most vulnerable. As of Jan. 6, just 8.8 percent of people in low-income countries had received at least one dose of a vaccine, compared with 58.8 percent of the world population, according to Our World in Data, a joint project between the University of Oxford and the nonprofit Global Change Data Lab.

“If we had even a fraction of the funding that Moderna had gotten, there's a possibility the world could have been vaccinated by now,” said Hotez. “And nobody would have ever heard of the Omicron variant.”

As of late October 2020, the U.S. government had invested $12 billion dollars in vaccine development as part of Operation Warp Speed. The Texan team invested just $6-7 million total to develop Corbevax, all raised through private donations and one $400,000 grant from the National Institutes of Health (NIH).

Bottazzi told Motherboard that her team “constantly” sought government funding “at all levels” in 2020. They made pleas during congressional hearings, webinars, and conferences; to journalists; and through op-eds. The philanthropic arm of the Texas-based Tito’s Vodka, which donated $1 million to the effort, has contributed more funds than the U.S. government.

The team met also with The Gates Foundation on at least one occasion in the early stages of development, but, Hotez said, they couldn’t engage them either. In 2020, Bill Gates bragged about convincing Oxford University not to release its vaccine under an open license.

“In terms of Operational Warp Speed, it was made pretty clear to us that we were not in the running,” said Hotez. “It was all about supporting and incentivizing the pharma companies, the multinationals and focusing on new technologies, and that was a huge source of frustration for us.”

It’s still unclear why Operation Warp Speed prioritized mRNA vaccine designs produced by large pharmaceutical companies over long-standing, cheap, easy-to-produce technologies such as Corbevax. But a likely reason is that mRNA vaccines may be more profitable than other vaccine designs. More than two-thirds of Congress cashed a check from the pharmaceutical industry ahead of the 2020 election, according to Stat News.

Tax filings from 2020 show that Biotechnology Innovation Organization (BIO), a group that lobbies on behalf of Pfizer, Moderna Johnson & Johnson and other biotech companies, gave $500,000 to Majority Forward, a nonprofit that works to elect Senate Democrats and $250,000 to American Bridge 21st Century, a Democratic fact-checking and research website. One Nation, a GOP-aligned dark-money group, received $250,000 from BIO in 2020.

An earlier public-private collaboration could have played a role in the US government’s investment into Moderna’s vaccine. Prior to the pandemic, Moderna had been working with the NIH’s National Institute of Allergy and Infectious Diseases (NIAID) on an investigational vaccine for the Middle East Respiratory Syndrome, another type of coronavirus. The work “provided a head start for developing a vaccine candidate to protect against COVID-19,” the agency wrote in a news release announcing its clinical trial for Moderna’s vaccine on March 16, 2020.

When the NIH partners with a company to design a drug, its scientists are typically listed as inventors on the patent. This allows the agency and its scientists to earn royalties from sales and potentially gives them the power to allow other companies to license the invention. From 1991 to February 2020, the NIH earned more than 2 billion dollars in royalty revenue from licenses of inventions associated with drugs developed by pharmaceutical companies, according to a Government Accountability Office report.

In 2020, Moderna filed to patent a genetic sequence used in its vaccine without listing NIH as inventors. A bitter dispute between the agency and Moderna resulted, with Moderna ultimately abandoning its application and re-filing another to delay the process.

Moderna has earned billions from the vaccine to date, and the average forecast among analysts for the company’s 2022 revenue jumped 35 percent after President Joe Biden laid out its booster plan in mid-August, according to Marketwatch.

“COVID is just such a massive market. Your market is the entire planet,” James Love, director of the non-governmental organization Knowledge Ecology International, told Motherboard. “And at first, it's two doses. And then ‘oh, maybe you need to have a booster shot.’ And so there is a third dose, which is what I had.  And then maybe it's a special one next year. And then you begin to wonder, ‘where are we going with this?’ If you're talking about doing it with eight billion people, it makes it a pretty big market.”

Recent studies have shown that the public’s distrust in large pharmaceutical companies has contributed to vaccine hesitancy. As a truly open-source, not-for-profit vaccine, the makers of Corbevax say it could provide people with some sense of security that the shot is actually intended to improve their own health, not boost pharmaceutical profits.

“The mission of our vaccine center, which has been in operation for more than two decades, has always aspired to be open-source,” Bottazzi said. “With the emergency and the pandemic, it’s even better highlighted, the fact that you need new business models for vaccine development that are not just driven by economics. Vaccines, at the end of the day, should be a commodity accessible to all.” Editor’s Note: This post was originally published in January 2018 and has been edited and updated for relevancy and comprehensiveness. Islamic Fintech and Financial Inclusion … Read More ›

The introduction of Cash Jameel is part of the company’s strategy to diversify its financial products and serve a larger segment of its customers and meet their needs.

The genesis of this product comes on the back of the launch of various products by the company within the financial services sector, including financing for cars, heavy equipment, as well as productive and consumer assets.

Abdul Latif Jameel Finance prioritizes the burgeoning small and medium enterprise sector and understands the importance of supporting it as a means of driving forward the development and advancement of the nation’s economy.

The company collaborates with the Small and Medium Enterprises Authority and the “Kafalah” program to support this important sector.

Small and medium enterprises may apply via the company website: www.aljfinance.com